27 Oct 2020
Any zythophile is sure to be familiar with Mikkeller, and although I would love to discuss their beers, today is all about their running club. Denmark is well-known for being a beer nation, so it should come as no surprise that we are very proud to have Mikkeller as one of our partners.

In the midst of a busy schedule as the club’s 6-year anniversary is under way, I got the chance to sit down with Søren Runge, manager of the Mikkeller Running Club to talk a bit about beers, miles and beer miles.

Mikkel Borg Bjergsø (Mikkeller founder and owner) and Søren go way back, they were both studying to become teachers back in the mid-90s. While teaching, Mikkel started experimenting with brewing his own beer on his free time. He began dedicating more time to this new hobby, which came with invitations to dinner parties and breweries where he was always encouraged to taste their best products.

This new bon vivant lifestyle, although pleasant, was not the healthiest. Søren was simultaneously trying to quit smoking (once again) and looking for something to replace that addiction. As the friends got to talking, they agreed that running was the only way forward, both to lose weight and to reactivate the body.

“There was just one small problem. We never seemed to get our runs done, unless we had an appointment with someone else. So we thought there must be more people like us and that’s when we decided to post on the Mikkeller Facebook page, this was back in 2014. We said we would go for a run and then grab a beer.” 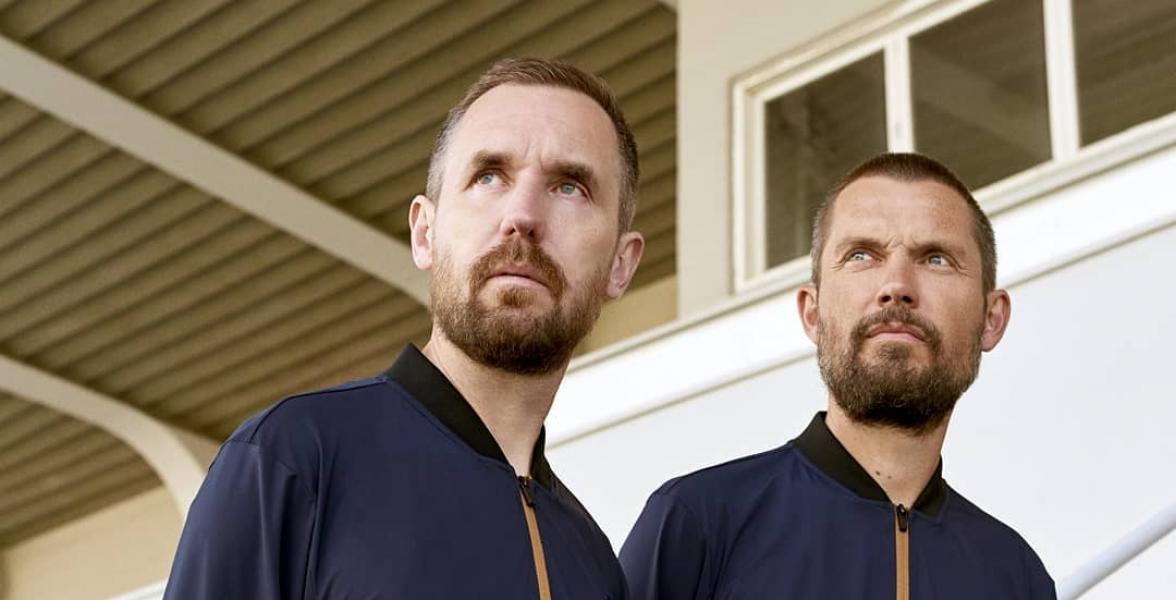 The first Saturday, eight people showed up. The next Saturday, twenty-eight people joined. The third time, there were about 100 people. It became a monthly appointment, first Saturday of each month. From then, the numbers only went up. That’s when they received an email from Stockholm, asking how people there could get involved in the running club, to which they replied, “just post on Facebook, make an appointment with other runners.” Just like that, new chapters started showing up all over the world. They eventually reached 265 chapters in 37 different countries, making it the largest running club in the world (probably).

"It’s hard to prove since we don’t have the names of all the members, but we have counted between 25.000 to 30.000 runners. We initially thought it could be fun to be the biggest running club in Denmark, but now we say why not aim for the world.”

That’s quite a jump, from a small, Nordic country to the world. The rapid growth of MRC started raising the question: why beer and running? Simply because it just so happens that Mikkel is a brewer who used to run a lot. For Søren, the idea of combining the two isn’t as far-fetched as some make it to be. It’s quite common for a group of friends who do sports together to grab a drink afterwards.

"We run to drink beer and eat good food." 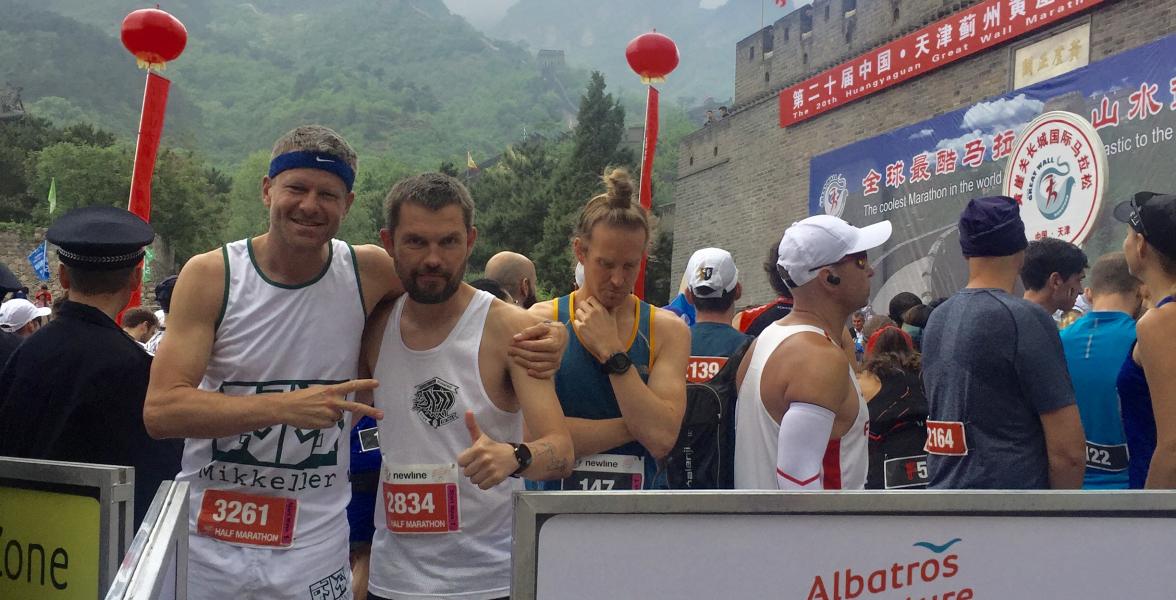 This is very much in line with the whole Danish culture and mentality, it’s all about finding a balance in life. Søren and Mikkel wanted to push beyond this balance, and test how far they could go. Could the energy from the beer replace an energy bar? That’s when Mikkeller’s first beer meant for runners was born, the IPA “Energy bar”. Still not fully satisfied by this, they decided to run the Copenhagen Half Marathon in 2016 only drinking beers.

“It was tough, the beer was good though. We didn’t get enough water, but I did my best time back then.”

Mikkeller Running Club has always been free to join, up until July this year, when the club presented a new optional membership. People can still join their runs for free.

“We have put together a super cool package for members, you get a t-shirt, a cap, and a card that entitles you to 10% discount in all the bars and the web shop. Actually, now it’s a 30% discount because we now have MRC happy hour, so 1 hour after the run you get 30% at the bar.” 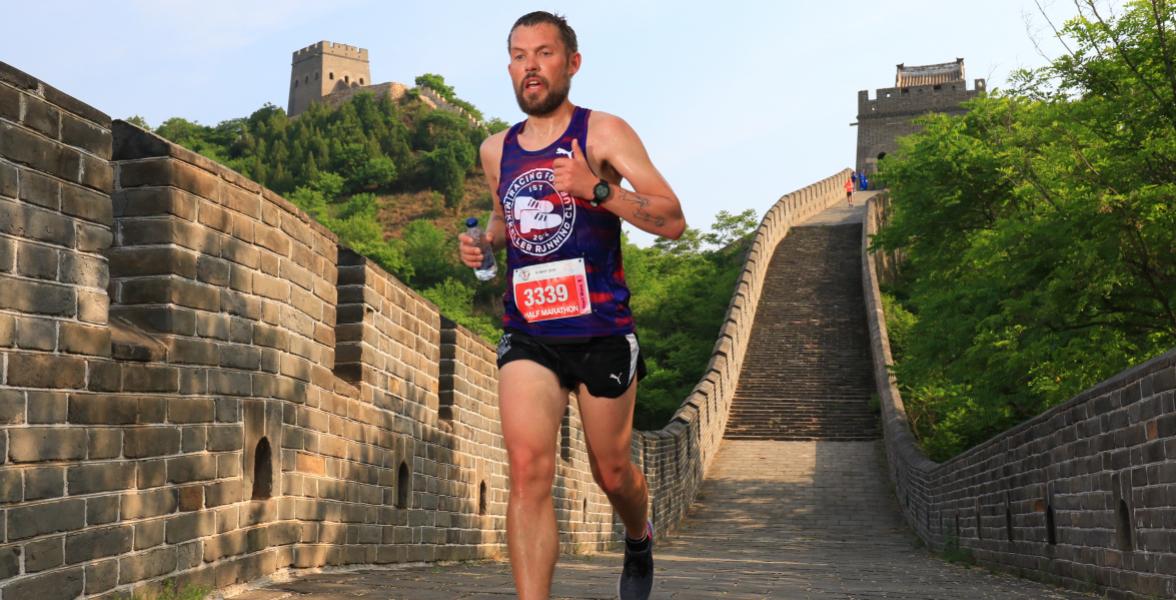 We started working with Mikkeller when one of our team members approached them to ask about doing a project together. As ideas started bouncing back and forth, there was one that stuck: the World’s Fastest Marathon.

“We already had the idea of breaking the sub-two marathon barrier. What if you just ran downhill, then you would be very fast. Why hasn’t it been done?”

That’s when our team started looking for feasible locations. To celebrate the partnership, Mikkeller sponsored the beers at the finish line for the Great Wall Marathon in 2018 and 2019. Søren also got the chance to participate in the Great Wall Half Marathon 2018 where he came in second, he was too busy soaking up the surroundings and taking pictures. The following year he came in first. 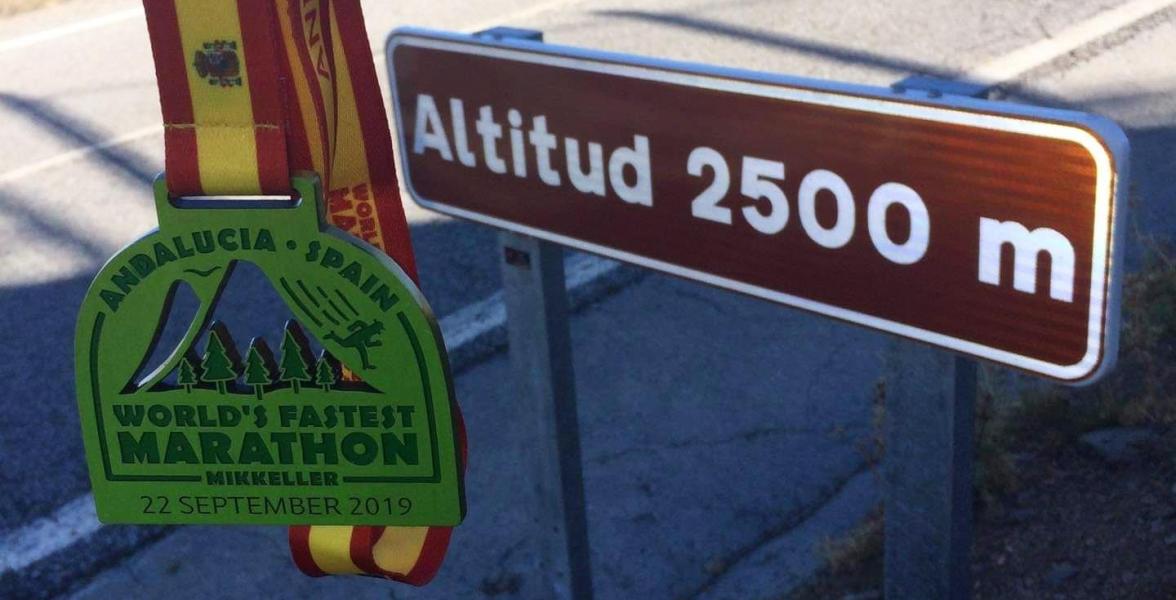 “I’ve done a lot of city races, but I was so impressed by how this race and the whole thing was operated by Albatros. I’ve never seen anything like that. It’s quite a big thing getting runners from Beijing to the Great Wall in order to start the race at 7 am, if I remember correctly, and all the logistics were just insane. It was a crazy, super cool experience.”

The World’s Fastest Marathon premiered in Granada in 2019. Despite their best efforts, the MRC runners did not manage to break the sub-two marathon barrier as they intended. This remains their goal for next year. When asked about any other marathon ideas, a Brewery Marathon in San Diego comes to mind, or something slightly different, organizing a bus tour from Copenhagen to the Berlin Marathon for MRC runners, we can combine our expertise: logistics and runners.

Despite the current uptick trend in running around the globe, this year has also brought up many challenges for Mikkeller. The positive side is that a lot of people are interested in joining the club, but there have been many issues due to the restrictions on gatherings around the world. In Copenhagen it hasn’t been terrible, since Mikkeller have several locations where they can meet up in smaller groups but in the USA, it simply hasn’t been possible for some chapters. Interestingly enough, MRC is not only about running but a big part of it is also the tourism that comes with it. They have made a “sport” out of travelling and meeting different runners from other chapters around the world, one of their most popular hashtags is MRCtourism. Beer, running and travel – sounds like a match made in heaven! 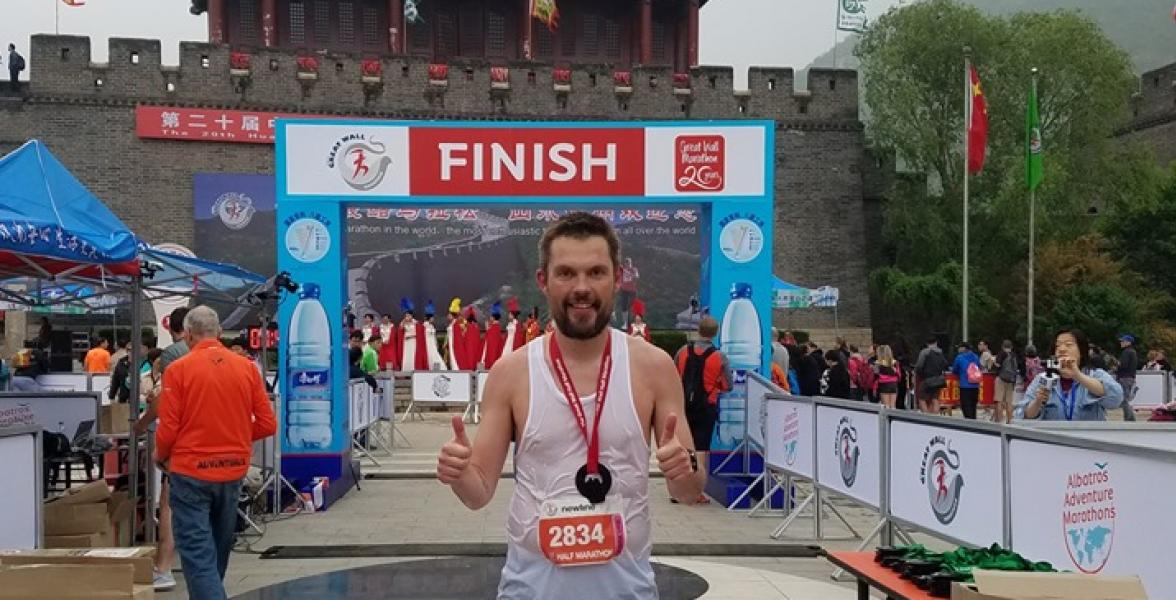 “I must say running the Great Wall has definitely been the best experience, it is by far top of my list and not because I won, but because of the whole atmosphere and the surroundings, running through the small villages with all the locals cheering for you is just the best feeling. It was simply amazing.”

As for the beer, the MRC beer is definitely in the top contenders, an organic German Pilsner, and Warpigs also make some good ones. As we finish the interview, Søren generously asks if I can manage to take some beers back to the office for the team at Albatros Adventure Marathons, to which I happily agree to. It's always a pleasure to visit the Mikkeller HQ!