24 Feb 2020
Every so often, we come across a truly inspiring person whose story deserves to be shared with the world. Case in point: Thomas Eller.

Thomas is a passionate 39-year-old runner who was born and raised in Essen, Germany. Shortly after he was born, his parents were told that he was deaf for reasons which are, to this day, unknown. After struggling with weight gain and subsequent bullying in his early teens, Thomas discovered a love of tennis and running. Running is advantageous in the sense that all you need is a pair of shoes – a convenience Thomas discovered when he began his studies in Cologne. During his studies, he began to run anywhere from 9 to 15km every day.

Thomas is currently working as a teacher for deaf children and teens in his hometown of Essen. This is where he met Rafael, another dedicated runner, back in 2018. Rafael amazed him with stories of all the marathons he had participated in. There was one marathon in particular that captivated Thomas’ attention: the Petra Desert Marathon. He knew that if he were to ever consider running this marathon, he would need to dedicate a serious amount of preparation to it. 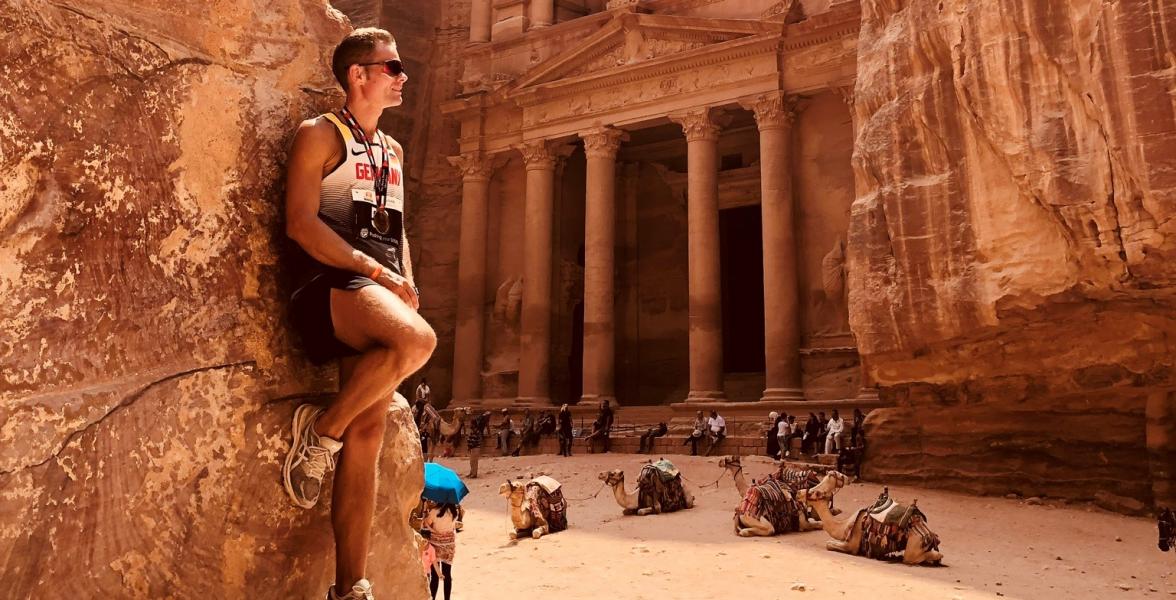 Taking on his first challenge

Three months before the marathon, Thomas and Rafael started training by running 20 to 24 km every other day. As the date approached, Thomas felt more and more enthusiastic about it. However, he also felt some trepidation as thoughts began to stir in the back of his mind: would he be strong enough for the marathon? Would his hearing disability pose an issue to communicate with the organizers and other participants?

Thomas took care to inform the Albatros Adventure Marathons staff of his disability and explained that he could read lips. So, during the briefing on race day, Thomas was standing at a distance that allowed him to read the organizer’s lips. He found everyone to be very kind and helpful, and the day went incredibly smoothly. Thomas recounts how the morning walk through the Bab As-Siq to the Treasury (the starting point) was an unforgettable experience. He notes that the most special moment of all was the first glimpse of the Treasury through the smooth sandstone walls. He recalls:

“This was so special […] everyone had goosebumps and all the gorges had nice colors at sunrise.”

In addition to the memorable start, Thomas notes that the entire marathon was breathtaking. He states:

“I enjoyed every second there […] The sunrise with the colorful shades on the red rocks, the view from the top of the mountains and the Jordanian kids running a few meters with me, they were the icing on the cake.”

Tears of joy soon came as Thomas finished the marathon and discovered that he had placed 4th in his very first marathon. When asked about the hardest moment of the Petra Desert Marathon, Thomas made sure to mention the killer hills – at first, he wasn’t sure he would make it past 10km. Instead, his stunning success, as well as the friends he made on the trip, inspired him to sign up for another Albatros Adventure Marathon: the Polar Circle Marathon. 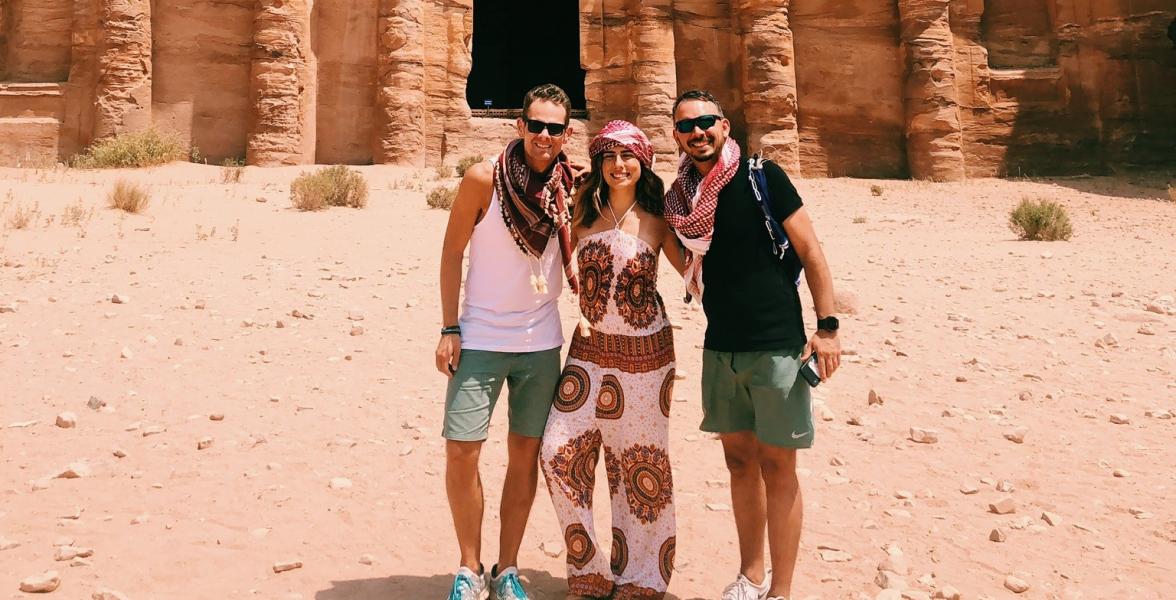 Thomas with his friends Rafael and Rachel from the USA

As he began to prepare for the race, Thomas received some unexpected news – he had gotten a bib for the New York City Marathon, which was due to take place one week after the Polar Circle Marathon. In fact, Thomas had signed up for more than the Polar Circle Marathon; he had signed up for the Polar Bear Challenge, in which he would complete the marathon on Saturday and the half-marathon on Sunday. While most people would hesitate to take on this challenge, Thomas looked forward to it.

Thomas recalls how it was a difficult decision to sign up for Polar Circle because he isn’t such a fan of cold and snow. The cold air, ice fields, snow-covered gravel roads, and running with spikes all made the marathon harder than expected, especially when compared to the Petra Desert Marathon. That said, Thomas thinks he will never forget the breathtaking experience of standing at the start line, feeling the ice-cold air on his face and the excited buzz of fellow runners and friends. 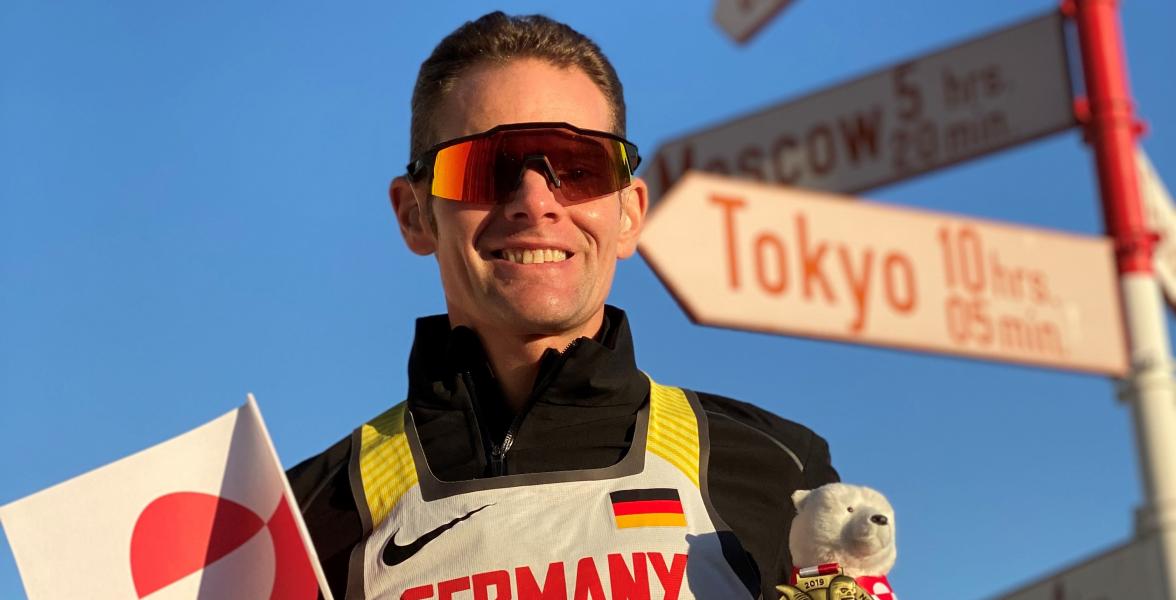 Thomas at the Polar Circle Marathon

The best moments of the race, naturally, took place on the Greenlandic Ice Sheet. Thomas remembers:

“The silence out there and the untouched rough nature touched my heart. I shed some tears on that course. We all know the climate is changing a lot and we don’t know how long we can enjoy the beauty of these glaciers – so I was so happy that I could leave an unforgettable mark on my heart.”

Despite the challenges of running with spikes, Thomas finished in another impressive fourth place. The next day, with sore, heavy, tired legs, Thomas once again toed the start line. The nature powered him up and inspired him to push through, and he completed the Polar Bear Challenge! Traveling to Greenland had always been on Thomas’ bucket list, and now he had gotten to run through some of the magnificent natural settings the island has to offer.  Thomas was also able to reconnect with friends that he made during the Petra Desert Marathon, make new friends, and enjoy the ethereal Northern Lights – all adding up to a great Greenlandic adventure. 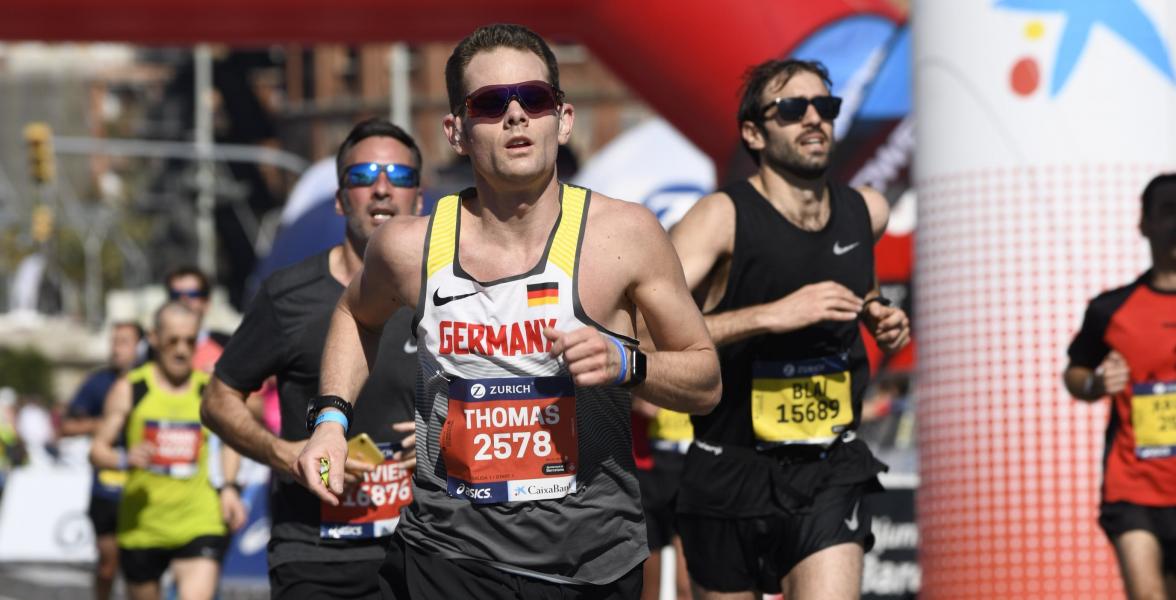 Thomas at the Barcelona Marathon in 2019

After the Petra Desert Marathon, Thomas became a marathon aficionado. In 2019 alone, he ran a total of 11 marathons. 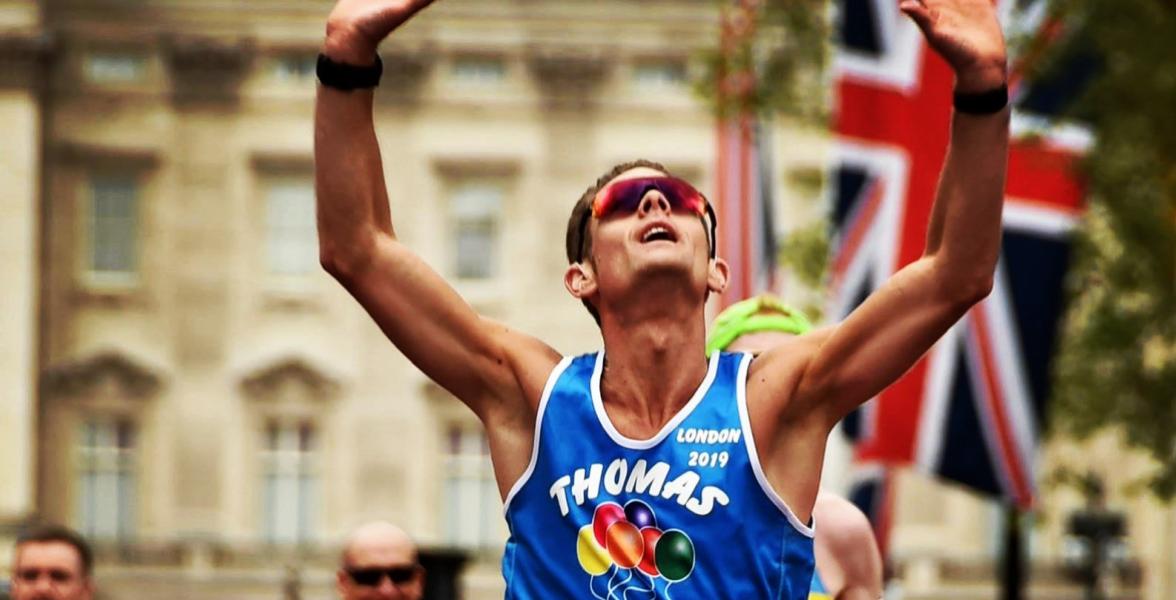 The next big challenges for Thomas include the Boston and Tokyo marathon, which will make him the first deaf-born six star-medal finisher. Due to the cancellation of the Tokyo 2020 marathon, he will postpone it to next year. In the meantime, he will train for the hills of Boston by doing the Seville and Ghent marathons. He will also compete for Germany in the 4th World Deaf Athletics Championships in Poland this July (2020). Thomas is making history for the deaf community; he wants to inspire others to do the same and prove that: 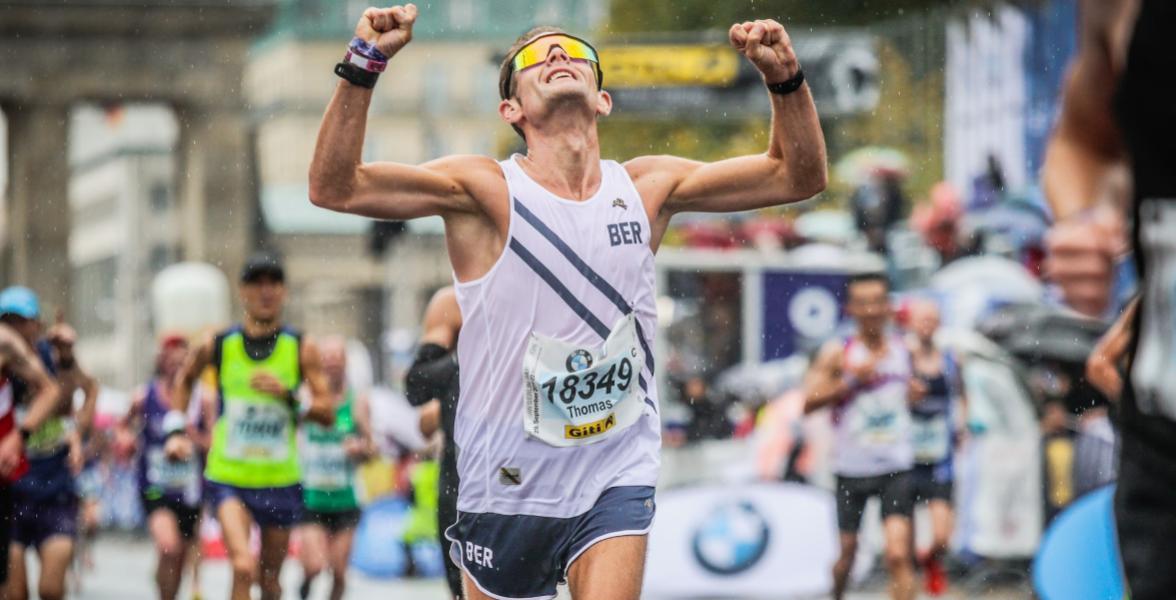 Thomas became Germany’s fastest deaf runner in Berlin 2019 (personal record 2:47:11hrs, Boston qualifier)
“We can achieve great things in our life – even with a disability.”

In order to accomplish these dreams, Thomas has had to overcome a few additional challenges. The most significant is not realizing when people are cheering him on or calling out his name at races. This also means he can’t hear any bikes or cars that may be nearby until he sees them pass, which can sometimes be startling. Despite these hurdles, Thomas enjoys being what he calls an “eye human,” someone who lives through sight. It is this calm silence that makes him happy in the mornings.

Thomas has many friendships from his marathons that go to show that communication barriers can always be overcome.

As for his future with Albatros Adventure Marathons, he hopes to take part in the Bagan Temple Marathon and Big Five Marathon in 2021, alongside the friends he made from Petra Desert Marathon and Polar Circle Marathon. We look forward to seeing you there, Thomas!